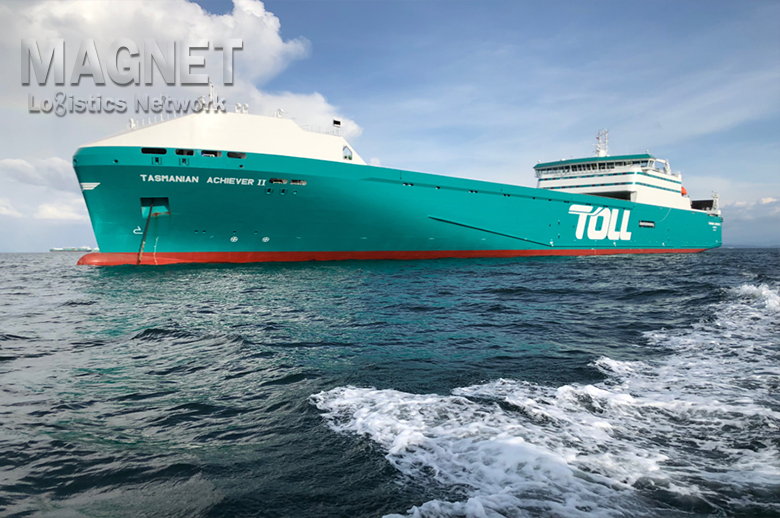 Global logistics player, Toll, has officially launched two new roll-on, roll-off (ro-ro) ships for the carriage of trucks and containers across the Bass Strait between mainland Australia and the island of Tasmania. Extra capacity is sorely needed on this growing trade. The first commercial sailing begins in just a few days, on March 1.

The two new ships, the Tasmanian Achiever II and the Victorian Reliance II, are bigger and faster than their predecessors. They have a different internal configuration too, which should speed up load and discharge times.

Toll’s two new ships are near-identical sister ships. The two new vessels will sail between the port city of Melbourne on the southern Australian coast and the town of Burnie, located on the northern shore of Tasmania. They will have an estimated average speed of 21 knots and are forecast to sail the 251-mile (403.66 km) Bass Strait in about 12 to 13 hours, about an hour or two quicker than the predecessor vessels. They will provide a twice-daily service that runs Monday to Saturday. The service offered by the ships will also offer later cut-off times and receivals.

“Faster means it handles the weather conditions better. It means improved, sustained on-time arrival, it means shippers’ cargo gets into the market quicker. We have to connect with interstate, we have to hit that connection. With that extra hour, it’s what the truck drivers need to get up the road on time,” Steve Borg, Toll’s executive general manager – Tasmania & shipping, explained to FreightWaves.

The new ships are greener than their predecessors too. They will plug into the local power grid while at berth, rather than running their own engines for power. The vessels have also been built to comply with the IMO 2020 sulfur emissions standards and feature on board scrubbers for emissions filtering.

Toll intends to sell the predecessor vessels, the Tasmanian Achiever and the Victorian Reliance, on the second-hand market.

Hundreds of millions of AU$ in upgrades

In total, Toll is investing AU$311 million to upgrade its Bass Strait capacity. The new vessels cost AU$86 million each. Deploying larger ships required an infrastructure upgrade at the McGaw wharf, Burnie and also at Webb Dock, Melbourne. Those construction projects are underway; there is a process in place to allow cargo operations during the construction disruption.

At Burnie, upgrades include the replacement of new shore-side ramps, improvement of the mooring system, upgraded wharf-fenders and new concrete dolphins to take longer mooring lines. Dredging also took place, with 8,500 cubic metres of silt, clay and sandstone removed from the berth. A new shore-to-ship ramp will be installed which is 27 metres wide and 24 metres long. It weighs just under 170 tonnes.